One of the last daytime car shows of the season was staged on June 13 in West Palm Beach on busy Okeechobee Boulevard at a Lowe’s store – competitor to Home Depot. Due to heat buildup in the afternoon at this time of the year, the show was scheduled from 10 a.m. till 2 p.m.

Most of the cars at this show were from the sixties and seventies with which we are all familiar. Photos taken were those of something different than the usual show cars.

A crowd favorite was the Vietnam era Huey helicopter which drew the usual attention as a photographic favorite. Visitors posed with weapons for memorable photographs taken aboard the craft.

A huge AMERICAN flag was flown from a new (November, 2014) Sutphen 70 foot elevating platform fire apparatus which is also a pumper carrying 470 gallons of water and is capable of discharging 1500 gallons of water per minute. This type of apparatus is called a 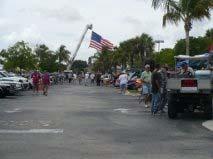 The American Flag being held by a Sutphen 70ft Elevating Platform

Hardly ever seen at local car shows was this 1921 Rolls Royce which was displayed by its fourth owner. This vehicle drew a good 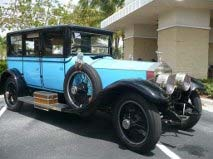 A different type of pickup truck customization shown, was the use of the cab of a COE to replace the original cab. When have we seen this before?

Palm Beach County Sheriffs provided a number of retired police cars to the show and a trailer with a horse which can be seen looking out the door of the trailer.

There was plenty of food, raffles and give-aways — the temperature reached 92 degrees by 2 p.m.

A view of one aisle of the show is typical — about 100 vehicles were present.
Posted in Car Shows.