I always enjoy speaking with Milan and Pat Sharik and each time I speak with them I learn new and interesting things about cars, 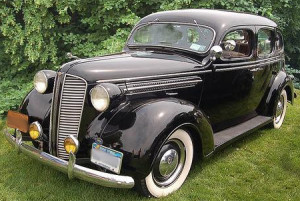 tractors and even them! This time, I had the pleasure of talking about Milan and Pat’s 1937 Dodge D-5 Touring Sedan. Most of us have seen their ‘36 Dodge and their ‘56 Plymouth Savoy (another cover car story coming up!), but have not seen much of their ‘37. This is an all original car that had the paint redone basically one panel at a time, but the rest of the car is essentially all original, with the original interior and 225 cu.in. flathead 6 cylinder engine. The car was found one Father’s Day, coming back from Koenigs in Floral Park with Milan’s Dad and Pat. Driving home on Jericho Turnpike in New Hyde Park, Dad happened to look in the King Kullen parking lot and spied the ‘37 sitting there with a for sale sign in it. Milan already had the ‘36 at the time, and it was in being restored. Dad figured he might want the car for himself, and called up the guy and they struck a deal. Once the car was purchased, Dad told Milan that he didn’t think the ‘36 would ever get done, so he could enjoy the ‘37 in the mean time. They drove the car home and have been enjoying it since. Coming back from another meet recently, the car started to backfire on the Southern State Parkway, and lost power. Finally getting the car home, they changed out the condenser and the mighty 225 roared back to life. Fast forward to this June, Milan and Pat were going to take the car to Old Westbury Gardens. The car started and they set out for their jaunt, but a block or so away, the ignition broke up again and they just parked the car on the side of the road, walked back to the house, and got the ‘36 out. Funny thing, the ‘36 won 1st place for the 1934-1939 class, using the ‘37 registration.

You are probably noticed that I have mentioned Pat a lot in this story. Pat is actively involved in all of these hobbies and

thoroughly enjoys them all with Milan. One OWG meet in the past, they had both the ‘36 and ‘37 there..Someone came up to Milan and wanted to know how he was able to arrange to have both cars there at the same time. Milan, not believing what he was hearing immediately joked back, “I drove the ‘36 10 feet, then went back and drove the ‘37 10 feet, went back to the ‘36 and so-forth until I ended up here”! The person couldn’t understand that Pat actually drove one of the cars out to the meet. Her enjoyment of the hobbies continues through all of the them, including their love of trains and trolley cars. Both Pat and Milan are certified trolley car operators, having studied and apprenticed at the Shoreline Trolley Museum in CT Pat pointed out that the two highest scoring individuals on the test were her and another member’s wife. On a trip to another trolley museum in Canada, Pat showed them her certification, and they turned the controls over to her to bring the trolley back to the station!
Posted in Car Collecting and tagged dodge, touring.