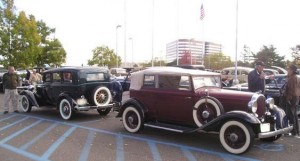 Sunday, October 26th gave us fair fall weather, a great venue and an incredible display of some great collector cars. The Long Island Sound Region of the Classic Car Club of America, once again outdid themselves with another terrific car meet. The GNYR was well represented there, with the likes of Mario Iasparro, Sal Cazonneri, Artie Finnegan, Stu Light, the Gramlich clan (three generations worth), Milan and Pat Scharik (Pat was sitting next to their Dodge knitting the most intricate and beautiful scarf I have ever seen) and Howard Attanasio. Many of us mentioned at several points during the day that this was a spectacular variety of cars, ranging from Howard Kroplick’s “Chrysler’s Chrysler”, to Rolls Royces, Jaguars, and even a Russian “Volga”

replete with tools, luggage, literature and everything needed to get into a Russian frame of mind! For those who like that sort of thing, there were plenty of late model and hot rod/modified/resto-rod vehicles and even a fire engine! It was interesting to see Gene McCoy’s former 1932 Plymouth PA Phaeton pulled right in front of another 1932 Plymouth PA “back to back”. It was many years since I have seen that car.

The wonderful museums of “Museum Row” were open and they are full of wonderful things for the entire family to see. At certain times I could even hear the crooning away to pull everyone in for a ride like a pied piper.

Jim Barnes and the LISR CCCA did a great job on this show and for your $15.00 admission, even received a lovely photo plaque with your vehicle, commemorating the occasion.

You could not beat the deal, the weather, the show, the cars, or the great car people that attended.