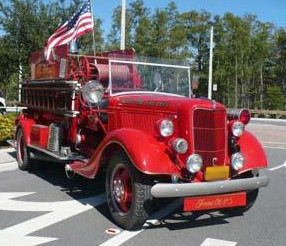 1935 Ford/Seagrave 500 GPM Pumper, when new, was in service with the East Hampton Fire Department.

First responders recognized were the West Palm Beach Fire and Police Departments, both celebrating their 120th anniversaries; Florida Forestry firefighters, and volunteer civilians who patrol the local area under the auspices of the West Palm Beach Police Department as the eyes and ears of the department, known as Citizens On Patrol (COP.) This date also corresponds to Fire Prevention Month and Fire Prevention Week. Antique and collectible vehicles, always part of this show, were in place by 10:30 am to prevent vehicle movement while visitors were walking around the area — a safety measure especially with children running around. At 11:30 am, a speech paid tribute to all first responders. This was followed by a few moments of silence in memory of fallen firefighters, police officers, our military and worldwide victims of savage brutality.

Lunch was then provided at no charge by the West Palm Beach Association of Firefighters to all present at this annual event. Pastry was provided by a local Publix supermarket similar to Waldbaums on Long Island. In addition to modern fire apparatus stationed at this firehouse, Florida Forestry brought over a brush truck and a large, heavy 2013 John Deere 655H tractor plow used for clearing a path and knocking down trees at the scene of a forest or heavy brush fire thus allowing brush trucks to attack the seat of a fire. Another fire apparatus attracting much attention was a recently restored 1935 Ford / Seagrave 500 GPM pumper which, when new, was in service with the East Hampton Fire Department. This apparatus now looks, drives and pumps as new and has been awarded many trophies. The current owner was a firefighter with the East Hampton Fire Department when this Ford / Seagrave was still in service.

Visitors enjoyed viewing the 1951 Plymouth P-23 now retired from the West Palm Beach Police Department. Of all the collectible vehicles displayed, a rarely seen 1950 Crosley Hot Shot was another great attraction. All collectible cars presented an attractive appearance and kept visitors busy with their cameras. All had a grand time.

This event was organized and coordinated. by GNYR member Marty Goffe, former firefighter with the Oceanside Fire Department.