An Insight into Blending

A Love of Motorized Transit

Another summer trip done with collaborative effort, was the trip to the Bayport Aerodrome. GNYR was joined by members of the Model A Ford Club and hosted by Bill Clifford, GNYR member, and a Model A Club member, and Early Flyer Frank Licari. Both Bill and Frank tooled around the area where the cars were displayed and the picnic lunch was taking place. Bill pulled up in his 1930 KinnerBird airplane, and then switched to tooling around the grounds in his 1905 REO. 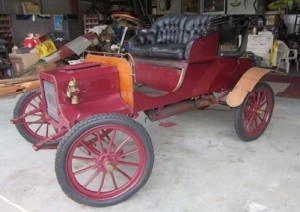 He was grinning from ear to ear like a kid in a candy shop while he deftly controlled his vehicle. A trip to Bill’s hangar gives you some insight into his varied mechanical interests. That REO that Bill has, by the way, was formerly owned by another GNYR member who frequently rode it around the Old Westbury Gardens grounds with the navigating assistance of another car buff.

Frank, at 97 years old, no longer flies himself or has a hanger, nor does he drive his Model A, or captain his antique boats, but he enjoyed visiting club members and fellow Aerodrome friends and was happy to be getting about in his golf cart. Both men had lots of stories, and, as you can imagine, captivated us with their enthusiasm. As all 45 club members gathered for a picnic lunch, we talked of Frank and Bill’s love of things mechanical. And, the weather was perfect – a very light cloud cover and a delightful breeze. It goes to show that New York City and Nassau County weather is not an indicator of the weather at the Aerodrome.

An interesting conversation was held with flyer Bill Fritts. Bill has a Steerman that was built as a trainer prior to WWII. Bill has dedicated the plane to the crew of the aircraft carrier on which he served during WWII. If you go on the trip to the Aerodrome next year, you’ll want to engage Bill in some conversations about his experience.

Some major changes are underway at the Aerodrome. For one, the re-construction of a Yak, a Russian plane, which we heard about while on last year’s tour of the hangers, is now fully underway, with current projections of the re-construction being done in Spring to Summer of 2015. Right now volunteers are taking a sewing class in order to learn the art of stitching fabric onto the wings. I, for one, heard about this project and have worked on the plane throughout the year. The carrot? If you work on the plane, not only are you preserving a piece of history, but you also get to fly in the plane. I have had every assurance that my personal insurance will not have to be used – the plane, which was built to be outfitted from the bare bones up every five years, has a good flying history.

There is something even bigger going on at the Aerodrome. This past fall and winter a new building has been constructed which will house a vast collection of early flight memorabilia. Principal among that is a 1912 Bleriot which is now on loan and is on display at Islip McArthur Airport for display to the wider public. Classroom, space for technical work on aircraft parts, and office space are also included in the new building. Last year, while on our visit, we saw a class of potential fliers underway. I was quite surprised to see the variety of folks who were in the class. There were young and older, and Old. There were teen boys and girls, and women and men of all ages. Yes, it was mostly men, but the sight of the women in the class planted a seed in this author. Maybe, just maybe, this will be a new hobby to explore – when there is an opening in an otherwise busy schedule. For now, I’ll just stick to planning trips and interesting programs for our meetings.

Do you wonder what next year’s trip to the Aerodrome will be? With fewer crosswinds, at least one lucky member will be able to fly over the Great South Bay with Bill, maybe some lucky member will be able to get a flight in the Yak, and definitely all will get to not only visit the hangars, but also visit the museum. How lucky we are that the Aerodrome leadership want to continue to cultivate the relationship between our mechanical knowledge of Long Island’s motor history with their knowledge of flight history. We have been invited to other activities and the Aerodrome, and definitely to return next year. How lucky we are!