The Celica was the first Japanese model to claim the World Rally Championship crown. I was always in love with the styling of this Toyota from its conception in 1970 to its demise in 2005. The last car was produced at the end of April 2006 with seven variations or generations produced. The founder of the Toyota Motor Company was named Kiichiro Toyoda and that company was formed in 1937 with a capital equivalent to $35,000. The company has grown in leaps and bounds and that brings us to my 1980 Toyota Celica GT Liftback. This 1980 is called the second generation. With my late dad, Frank, I ordered the car from ABC Toyota in Valley Stream.

The vehicle took 8 weeks to arrive from Japan,but during that time, because of the great demand and poor supply, the price went up $2,000. The car was almost given to another person but because I had the wrong vehicle identification number (accidentally given by another salesman). However, I obtained the car. A quote from 1980 stated “Japanese cars have long since ceased being built primarily for their home market…with low price increases, going across the current trend, no wonder that cars of its breed are taking such big chunks of the American market.

The car has a tilt steering wheel, improved seat design, a new grill design, powered steering, a new rear light cluster, a tighter suspension for the GT (thanks to the addition of a rear anti-roll bar) and a full center console among other improvements over the preceding generation.

My Celica was originally bought as a work car but I enjoyed it so much I bought a Monte Carlo to take me to work. 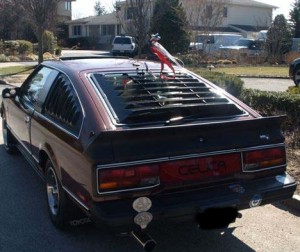 It has only 19,500 miles in 33 years. Original tires (thanks to being garaged with no ultraviolet rays), wipers,wiper fluid, carburetor, etc. My original battery lasted 18 years and the second lasted 15 years due to a trickle charge over the years. The Celica is a very rare vehicle and as someone on a website said “it deserves to be not in a garage, but in some museum. That is one reason why I love showing it at car events. The Toyota has won multiple awards and trophies but the biggest trophy I receive, is getting to know all the wonderful car-people I meet.
Posted in Auto Curiosity, Car Collecting and tagged Celica, gt, liftback, Toyota.