The weather conditions for this event were ideal with low humidity, a mild cooling breeze and a maximum temperature of 85 degrees. Fire apparatus present were a 2010 Sutphen quint shown with the 75 foot ladder extended. This apparatus is capable of discharging 1500 gallons of water per minute when in pump mode. (See photo)

The second Station 7 apparatus is a 2012 International / ALF MedTec rescue truck which is virtually a mobile emergency room.

The third apparatus at this station is a 1991 Ford F350 brush truck with less than 20,000 miles on the odometer — the oldest active vehicle in West Palm Beach Fire Rescue.

This truck tows a trailer mounted mini ATV fire pumper used for fighting fires at otherwise unaccessible locations. The Florida Division of Forestry displayed a tractor plow (often confused with a bulldozer) and its prime carrier, a 2007 Sterling. The tractor plow is a new 2013 John Deere 650G which was designed and engineered specifically for forestry firefighting service. Its main function is to clear a path for apparatus which can discharge a large volume of water at a brush fire. The tractor plow is equipped to discharge water in the event of a flareup under the vehicle. It is highly computer controlled and the cab is air conditioned. (See photo) 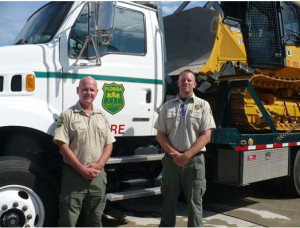 The West Palm Beach Police Department displayed a Ford Crown Victoria. In previous years, one of the road patrol motorcycles was displayed, but this weekend, the “motors”, as they call themselves, were on a weekend training session.

To complement the vehicle display, thirteen antique / collectible cars were displayed, less than in past years due to other competing car shows in the area. The oldest of these was a 1929 Essex two door coach. in beautifully restored condition. Essex was a lower priced model made by Hudson. A 1934 Mercedes SS roadster repro received much visitor attention as did the Essex. All other cars displayed were beautiful, ranging from a 1939 Ford to a 2013 Camaro. (See photos) 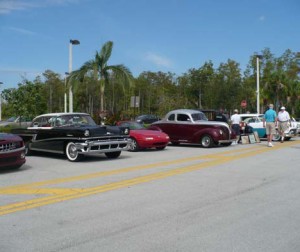 A recognition day tribute to all first responders was followed by lunch provided by the West Palm Beach Association of Firefighters Local 727.