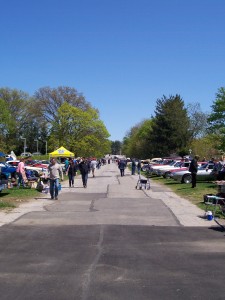 A view of the Long Island Historic Motor Parkway

On a beautiful Spring day – April 24th, 2016 – the GNYR held it’s first antique car show and flea market at a section of the Historic Long Island Motor Parkway, also known as the Vanderbilt Parkway, in Williston Park, NY. The event attracted a wide variety of cars and trucks, including the 1909 Alco “Black Beast” that once raced on the Motor Parkway all those years ago.

Some people were able to get a ride in the Alco. See the short video below for what must have been an impressive ride.

Once again, it was a great Long Island Spring Day for a car show!

We hope to see you all there next year!