The diecast bus is a model of the rear-engine Greyhound.

October 27, 2015 marked the 75th anniversary of the closing of the 1939-1940 New York World’s Fair held at Flushing Meadow Park in Queens, New York. The theme of this fair was “The World of Tomorrow.” For we antique / collectible car owners, this fair is well remembered for the introduction of the new mid- priced Ford product, the 1939 Mercury.

This spectacular fair was the forerunner of the 1964-1965 World’s Fair held at the same location 25 years later. Once again, automotive enthusiasts will remember this fair well for the introduction of the new Ford product, the Mustang, which was an immediate sales success continuing on to its 50th year in 2015.

The centerpiece of the 1939-1940 World’s Fair was the Trylon and Perisphere. The former represented technology reaching high for new developments while the Perisphere represented the world. Some of the best remembered new technology exhibited at this fair was the new home information mode known as television, lady’s nylon stockings and air conditioning for commercial and home use.

Due to heavy traffic volume expected to visit the fair, the Bronx-Whitestone Bridge was completed and many other new roads were rushed into usage. The “Big Three” — Chrysler, Ford and General Motors, each had their own exhibition buildings. The General Motors building was called Futurama. The outstanding attraction inside the Futurama was a visitor’s ride inside an enclosed cab, complete with stereo sound, high over a huge diorama depicting the world of tomorrow complete with moving vehicles, buildings, homes, roads, super highways, bridges, rivers, ships, airports and the general landscape. Futurama was focused on the world as of 1960. As we look back, those vehicles of the “World of Tomorrow” are now registered in every state as ” collectible vehicle” or “historical vehicle.” 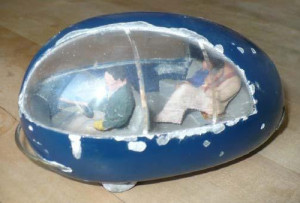 The future cars were projected to be powered by a small rear-mounted engine. The models of the future vehicles were on an endless track and had no actual wheels. They were made of plaster and plastic, and as the photos show, paint has peeled of strictly due to aging. I never played with these vehicles as a kid; deterioration is due to age and materials used.

My father worked in the Futurama Building in both years of the fair and was able to obtain the car and the taxicab when the fair closed permanently. The sedan is 6 inches long and the taxicab is 5 1/2 inches in length. The diecast bus is a model of the rear-engine Greyhound which was used to transport visitors around the fair from one attraction to another.

This model is 10 1/2 inches long and was made by Arcade, with the manufacturer’s sticker still on the right rear of the body.

World-wide, there were more than ten world’s fairs in the 1900s starting with the 1904 fair held in St. Louis and counting up to the Seattle World’s Fair and the Montreal World’s Fair held in 1967.