Sunday, October 11th, marked the seventh consecutive year of FIRST RESPONDERS RECOGNITION DAY held at West Palm Beach Fire Department Station 7. For this convergence of seven, the theme of the day was, ” The Seventh At Seven.” 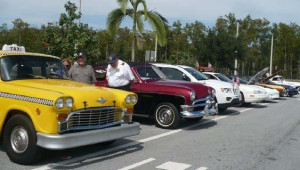 Some of the cars which drew the attention of visitors were a 1950 “bullet nose” Studebaker in Number 1 condition, a 1934 Mercedes Benz repro convertible coupe, a 1966 Amphicar, a number of Corvettes, and a hardly ever seen 1981 Checker taxicab — genuine — not made up — a veteran of service on the streets of New York City. The last Checkers were assembled in 1982. 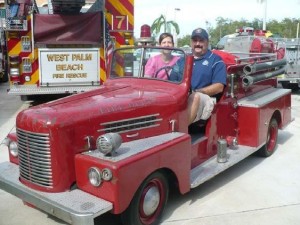 Miniature fifties style pumper based on a 1950 Crosley chassis

Three collectible fire apparatus present were a 1991 Ford F-350 brush truck which also tows a trailer-mounted all-wheel drive mini pumper — still in service at this fire station; a miniature fifties style pumper based on a 1950 Crosley chassis; a 1988 Pierce Dash 105 foot tractor-trailer aerial ladder truck, now known as a TDA — tractor drawn aerial — owned by a local Boston Fire Department retiree. Although this apparatus looks modern, it is registered as an antique in the State of Florida since it exceeds 25 years of age. One photo shows the Pierce (marked Boston) on the right, while posed next to a 2010 Sutphen quint which is a combination 75 foot aerial ladder and a 1500 GPM (gallons per minute) pumper, in service at this station.

Visitors to this event had a good educational day as firefighters patiently explained the “workings” of modern fire apparatus. and assisted them with family photo opportunities. The Association of West Palm Beach Firefighters provided lunch and drinks for all present. Nature cooperated by providing a beautiful sunny day with a comfortable 85 degree reading.

FIRST RESPONDERS RECOGNITION DAY was originated and continues to be coordinated by GNYR member Marty Goffe who was a firefighter with the Oceanside Fire Department on Long Island.