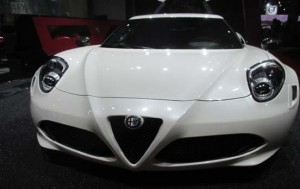 This year’s New York Auto Show was one that I especially couldn’t wait to attend since it marked the return of Alfa Romeo to this side of the Atlantic Ocean with the 4C, the first regular production automobile to be sold here since 1995 and the first GT since the era of my 1986 GTV-6.

There was ice on the windshield of my FIAT 500 which I had to scrape off in order to make it to the train station in time for a 5:36AM train to Manhattan. The freezing wind whipped against my face as I walked at a quick pace down 34th Street from 8th Avenue to 11th Avenue and into the Jacob Javits Convention Center. Over the years people have asked me what’s the rush? Why get there soo early? Well…there’s a looong line for breakfast that wasn’t short at 6:45AM which gave me just enough time to check in, have my press ID validated and have the guard dogs sniff my camera. Good thing the pooches already ate breakfast.

The hot coffee warmed me up and the scrambled eggs, potatoes, bacon, and sausage provided me with the energy I was going to need to spend the next several hours walking through several indoor acres of automotive displays.

On my way to the Alfa Romeo exhibit I spotted the new 2015 Ford Mustang…all I can say is that it’s a winner! It looks great…still has that “Mustang look” and finally…after 50 years Ford got rid of the solid rear axle and developed the new car with an independent rear end. You know there’s gonna be a wide range of engines: 4, 6 and 8 cylinders with a performance level and price for every pocketbook. 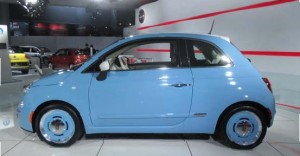 Fiat at the New York Autoshow

Next was FIAT. I’ve enjoyed driving my FIAT 500 Pop for the past two years. I mentioned in last year’s article that FIAT needed to have a basic 500 Pop on display….yeah…it’s nice to see the fancy stuff and the Abarth performance models, but there are so many economy cars under $20,000. When FIAT displays a car that is well equipped for under $17,000, maybe a little less with a discount or two, it’s gonna attract attention and bring business into their showrooms. 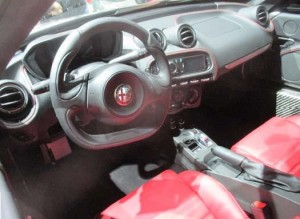 Finally….I spotted the Alfa Romeo exhibit…there they were…a white special edition 4C on a turntable and a gray one on the display floor. It wasn’t much past 8AM when I arrived. I couldn’t believe there were sooo many people looking at the Alfa Romeos including a couple of executives from Mazda. I guess like me so many people happy to see Alfa Romeo back in the USA.

I was introduced to Jiyan Cadiz, Media Relations Manager from Chrysler Group and the main media guy who was handling Alfa Romeo. I was given the “grand tour” of the 4C… shown everything and given a chance to sit in one. I’m not exactly a big guy at 5’6” and 155lbs and I fit into almost everything, but I gotta tell ya, it took a little effort to crouch down low and squeeze into the driver’s seat of the 4C. I was rewarded by a form fitting seat which you could sit in all day long driving the 4C on winding twisting roads. At about 2030lbs and with 347hp you know the power
to weight ratio will be impressive. The 11 quart oil sump, yep it’s a big one, will keep the engine running smoothly all day long. Like all my “Alfisti Brothers” I can’t wait to drive one. 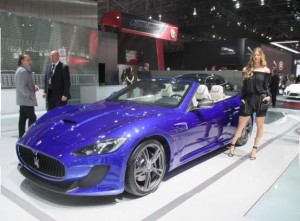 Next to Alfa Romeo was Maserati… how convenient. The car I was there to get a good look at was the Ghibli. I loved the blue metallic paint, and the interior The smell of the leather alone is worth the price of admission. I drank a cappuccino while taking to a few Maserati executives. They were as excited as I was as they have a great model lineup. The only thing I’d like to see in any Maserati is a manual transmission, preferably mated to a high performance V8. I can dream…can’t I?

I took the long walk to the other end of the Javits Convention Center to the GM area. I wanted to see the new Corvette in person….as far as technology and performance goes…nothing comes close to the Corvette in value….I just couldn’t get over the looks of the new car….maybe in a year or two I’ll get used to it.

Last was Buick…they’re nice looking…I always liked their traditional styling including the grill, but what were they think of with the new advertising with people saying “That’s a Buick?” If I was buying an upscale sedan in the $30,000 to $40,000+ range I’d want to see people saying “Wow…THAT’s a Buick!” In my youth I managed to date a few models I met at the New York Auto Show including several dinners with a beautiful British blond….I know I’m older and my taste in women have changed because these days when I see tall, thin, beautiful models in their 20s all I can think of is….I wonder what their Mother looks like?