September 13, 2013 was a day for car shows. Jerry “DocAir” Malkes mentioned some 9 shows that day. One of them was a rain date show that I always miss in June. The Long Island Chapter of the Studebaker Drivers Club Orphan Car Show. 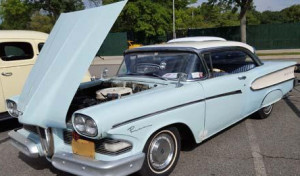 This meet, normally held around the 22nd of June, was rained out this year. The show is usually held on or around my wife’s birthday, and so I usually miss it every year. The rain date was the 13 th of September. I usually go to Sagamore Hill on this date, but with my folks out of town, and Scott’s Model T down and out, I was alone, and figured I would try something new. The meet is held at , so it’s a an equal drive to what it would be for Sagamore Hill. I felt I could circumvent the fuel issues my car is having and so I ventured out.

An Orphan Car is one, like the Studebaker, that was built by an independent manufacturer. This would encompass Nash, Hudson, Graham Paige (yes the 1930 GP we usually see at our meets was there), and the like. There was a really nice turnout of cars, especially considering this was a rain date meet and the other shows competing on this date. The crew from the Studebaker Drivers Club could not be nicer, and provided food, some vendors, and trophies. My Studebaker won two awards (It’s first under my ownership), One for being best “Pre-War” Studebaker (I won by default as I was the only one it that class), and the other was their “Old Crank” award for having the oldest car. I was honored to say the least, and had a fun day. I think the Studebaker felt honored as well, as the fuel problem kept itself in a manageable state for me to drive out and back without too much difficulty. A great meet that everyone should check out.