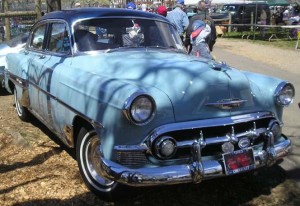 Tom Vitale, with his wife, Ann own the beautiful 1953 Chevrolet BelAir that graces our cover this month. Tom and Ann have been members of the Greater New York Region since 1998. Members know Tom best for the incredible and tireless job he has done for many years on the Queens Farmhouse meet we used to host.

The Chevy is a mostly original car, equipped with the famous Chevrolet 235 cu.in. “Blue Flame” 6 cylinder engine. That engine is what became known as the “Stovebolt 6”, which was Chevy’s warhorse engine that they used from 1928 to 1978.

The car has about 150,000 original miles, though it’s beautiful paint and interior would never let on the truth about the mileage. According to Tom, the first owner of the car pulled the car out of a junkyard, and did the interior work, but suddenly passed away. The second owner then completed the paint and exterior, but then he too suddenly passed away. Fortunately Tom broke the streak of bad luck as he has had the car since the year 2000. Tom used to have a house in Greentown, PA, not far from the classic car dealer in Milford, PA that he got it from. Tom had previously purchased a 1980 Shay Replica Model A from that dealer, and when Tom saw the ’53, he inquired and found out that the dealer would take the Shay and give Tom the ’53 Chevrolet plus $1,000!

When Tom got the car home, he thought the car had electrical problems, then changing the starter and battery, but soon discovered that by putting an alternator on instead of the generator, the lights would light up properly and the car had plenty of power.

The only other thing Tom has changed on the car is that he has steel belted tires, which he readily admits lose him some points at various car shows as they are not original equipment.

Tom and Ann both love the comfort of the car, to the point where Ann prefers to ride in the BelAir over the fairly new Chevy Malibu that they have, as the BelAir is easier to get in and out of. Tom and Ann look forward to many more wonderful miles as they “See the USA, in their Chevrolet”!