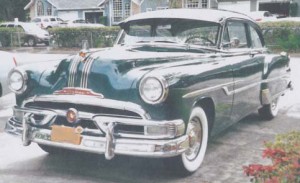 Art opens the garage door and starts talking to the 1947 Hudson Super Six coupe that has been his for some-odd 30 years. (Yes, he talks to old cars, doesn’t everyone? You know you do, and we know they hear us.)

Hey Henry, Old Buddy, how you been? C’mon, don’t shy away, I know I’ve been away for a while. Here, this’ll make you feel better, a genuine long handle California car duster, How’s that, I know that feels good. Lets get up between the fender and the hood, just like scratching behind the ears. Now, the other side and along the flanks and the top and back, get rid of the garage dust. Looking good, bright and shiny. Whataya say we go for a ride? Sounds good eh? Lets check under the hood. I think I’ll hook up the 6 volt charger to the venerable Optima battery, just to make sure, and let’s check your shoes. Remember
when we changed the old 600:16’s for for brand new wide white 650:16’s? Gave you a wider track and a little taller stance. That was for the long ride from Greenport to Greeley, PA a few years ago. What? Yeah, you’re right, quite a bit more than a few. We did a lot here in PA—fire house parades, picnics, car meets, shows at Zane Gray’s home, car club stuff. Then pow, I was knocked out of it for over a year. Yeah, you’re right again, no excuses, but I’m better now.

Let’s unhook the charger and take off the air cleaner, so I can squirt some of this engine start stuff down there. I know it tastes terrible, but hold on for a second. It clears out the sinuses. There, now I’ll slide in, clutch to the floor, key on, gas down, up and half way down, push the button with the “S” on it——-that’s it, cough and choke, now your’re running. We’ll get the air cleaner back on, close the hood and head out in the yard. Easy now, gotta work the clutch and the gas, no prancing around, no showing off, no body’s looking. Down the lane to the road, ease out on first, shift up to second, a nice canter, then down into third, more gas and now you’re moving right along at an easy gallop, like the Indian Palomino ponies, with their ground covering gait they could do all day. Here comes one of those Pennsylvania hills, we don’t see them on Long Island. More gas, to power up the hill. Double line, no passing sign, but these heavy duty high power Pennsylvania pick-up trucks love to roar on by so we ease over a bit and don’t let them bother you. Isn’t this great, with the breeze coming through the windows,
just cruising along for a while? Time to find a place to turn around and head on back.

Back home again, ease into the garage, shift to neutral, a nice quite idle, key off. How was that? We both needed that, I know I did. And I’ll be back again soon, old Pal-o-mine.

P.S. During his high school summers, the author worked as a horse wrangler at an upstate NY resort. He still wears western boots.