The Greater Los Angeles California area was always big on roadsters. A dry climate on an ocean enables one to use an open car for many days out of the year. In 1911 Harley Earl at age 18 started designing cars in the Southern CA area for affluent people who wanted something different to drive. Forty two years later, working at General Motors, the first Corvette was styled by him for display at the GM Motorama. Many of the 300 1953 serial numbered Corvettes were either sold to people picked by Chevrolet, such as military or industry captains like Colonel Elliott Springs in the last issue who purchased #155. Or, they were used for engineering or testing purposes, then perhaps dismantled or given to someone in the fray, such as General Curtis LeMay, who received #031 and #144.

I wrote about General LaMay in a story two issues ago. Starting in January, 1954, after all 300 1953 serial numbered cars were distributed, the business of selling the Corvette to the public became the great task. I had written about a Popular Mechanics survey in October, 1954, where Corvette purchasers were polled, and an October, 1955 Consumer Reports Road Test and Comparison of the 1955 Corvette vs 1955 Ford Thunderbird. It is stated that the Corvette is a great road car, but not competition ready as delivered. But then, few cars are. Even Ferrari was not sold as transportation until 1956. From 1947 thru 1955, most of their meager production was sold to competition racers of the marque, to their specifications. In addition to Enzo Ferrari himself, and his distributor friend Luigi Chinnetti, wealthy self funded racers such as James Kimberly, of the Kimberly Clark paper products empire ordered and purchased competition Ferraris for their sport.

Jaguar XK120, MG TC, OSCA, Siata, Jowett Jupiter, Talbot and many more were specifically ordered and modified by their drivers and/or sponsors. Harry Mann Chevrolet, and their Sales Manager Frank Milne, started in November, 1953 when they took delivery of #085 in their Crenshaw Boulevard showroom. Maybe Colorado Boulevard is famous in song, but it is the Boulevard of broken dreams. Crenshaw Boulevard is where dreams were made in the Harry Mann Chevrolet showroom.

toured with the 1954 Motorama and when it arrived in LA in March, he met with many local Chevrolet Dealers and their personnel. Frank was inspired to drive his newly purchased 1954 to the famed Pebble Beach Concourse, and as far north as San Francisco. The Corvette was not easily accepted by the foreign sports car crowd, as they felt "if it is imported, it is important". Very silly, but a lot of work was done by Milne and their dealership sold about 200 of the 1954 Corvettes in the Southern California area. At the Motorama event in March, Road and Track Magazine was in attendance and performed the first road test, which was published in June, 1954. They liked the Corvette, although it was not a "competition ready automobile". But it was desirable as an open roadster for the area. In the publicity photos of the event at Harbor Freeway and Rose Bowl, there were 8 red ones and four black ones, and about 20 white ones. The road test uses one of the four black ones. Interestingly, the under hood photo shows chrome valve cover and chrome ignition shielding, and expansion tank has the two depression bands. This Corvette is probably between serial #115 and #200. My red 1954, serial number 70, is very likely one of the eight red ones. 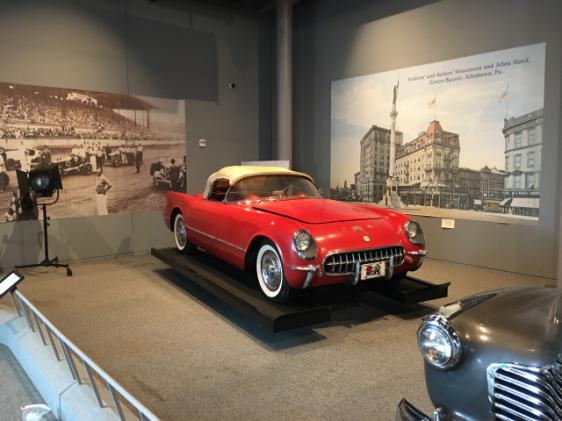 These repaints were lacquer over an assembled polo white car. Some of the white was removed but traces remained, and paint jobs were nothing like you see on restored show cars today. The nitrocellulose lacquer is a shock to show goers today. The ponit is colors other than white, extra chrome dress ups and extensive marketing to sell a roadster for about one year's pay in 1954 were achievements that are never documented in Corvette books, and I enjoy the research of this evidence.

In 1970 Frank Milne took in a 1957 on trade for a new 1970. He restored the Corvette and showed it all over the LA basin. He prided himself on first place trophies, tough to do back then with no large reproduction parts industry like we have today.

The Harry Mann dealership closed about 30 years ago. Frank Milne sold many high performance Chevrolet products on Crenshaw Boulevard, where dreams were made.