I decided to feature 1957 Fords in this article for 2 reasons: First, Ford introduced two significant models for 1957, and that I have seven different models in my 1/25 [scale model] collection.

The 1st model shown is the New Ranchero. 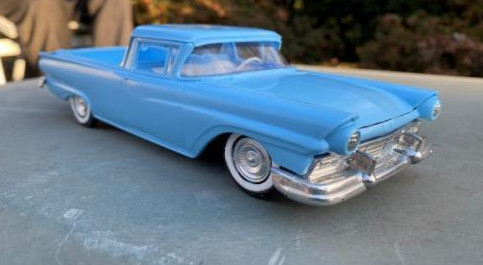 A stylized pickup based on the two door wagon and courier bodies. Making a stock Ranchero was a bit of a challenge, as the model was built from a Revell kit introduced in 1975 that could only be built as a mild custom! I remembered that I had extra 1957 Ford parts, especially chrome and clear parts I purchased from AMT Corporation way back in the mid 1960’s, 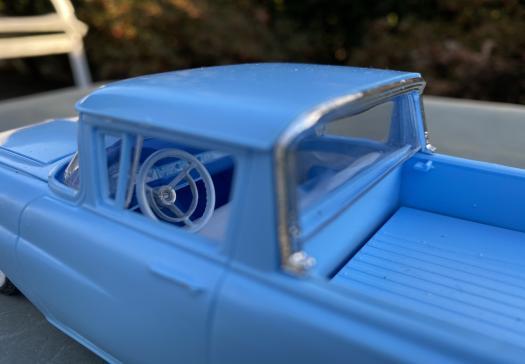 who were the official model makers for Ford from 1948 up until recent times. As an aside, AMT stands for Aluminum Model Toys, and their only aluminum model was a 1948 Ford Sedan! Beginning in 1949 they switched to cellulose acetate plastic bodies, which could be molded into actual car colors, producing a shiny finish without painting. More about that in a future article! 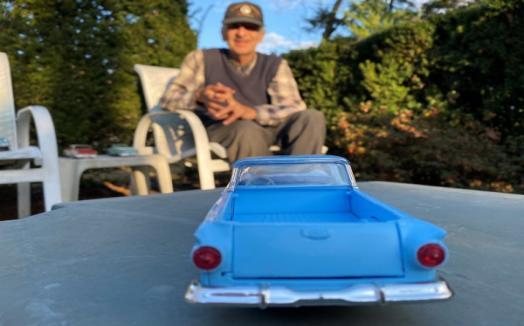 In addition to the retrofitted chrome parts, I found two extra clear red taillights from an AMT hardtop kit. The Ranchero body was molded in a light blue that is a close match to Ford Stardust Blue and displays nicely without painting. 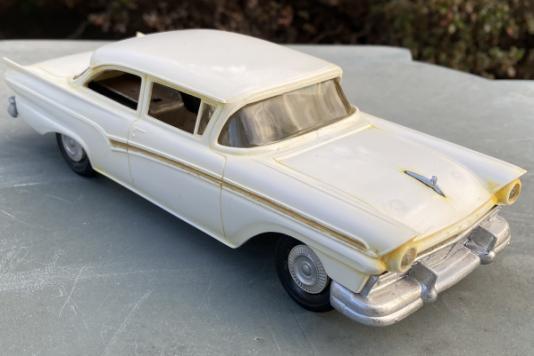 The second model is a very rare Custom 300 Tudor Sedan, originally produced as a promotional model by AMT in cellulose acetate, Master modeler and author John S. Fackre looks proudly at the 1957 Ford Ranchero model that he painted in 2 tone colors. By mid-1961, AMT realized that models molded in this plastic warped, sometimes severely when exposed to air and moisture. The model shown was only from a handful as a test run in early 1961 in a then-new non warping Cycolac plastic, which AMT switched over to by late 1961 for all of their promotional and friction model cars and trucks. I bought this model many years ago from a collector and it had bad paint, which I stripped off. Thankfully, the previous owner attached all the necessary bumpers, grille and friction chassis wheels to make a complete model! The unpainted body is a close match to Ford Colonial White.

The third model as an AMT friction promo Fairlane 500 Sunliner Convertible and exhibits the problem of warpage mentioned earlier, and in this particular model, the rear is warped downward. I purchased it missing the steering wheel and rear bumper which I replaced from my parts stash. The body is cast in a light blue that is lighter than Ford Starmist Blue. 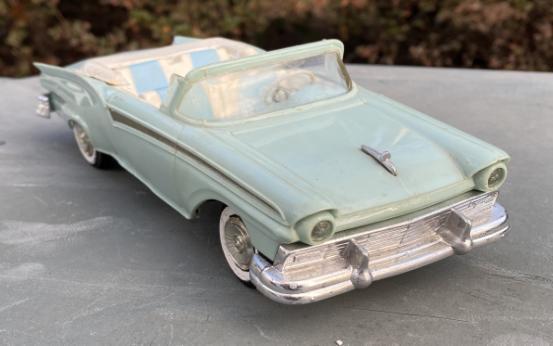 The fourth model represents Ford’s second “New for 1957” model, the Skyliner Hardtop Convertible. By way of history, the engineering for the retractable hardtop was originally proposed for a second bodystyle of the “super premium” Lincoln Continental Mk II, then cancelled and used instead for the Ford line! 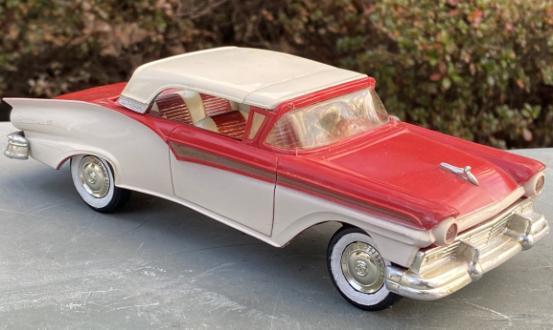 My model also shows warping in the rear. I created it from a Sunliner Convertible, missing its boot. The top was borrowed from a Revell kit of a 1959 Skyliner (The Skyliner roofs were identical for 1957, ’58 and ’59). My model was an early run AMT friction promo that has a 1956 interior (very similar to 1957) and 1956 wheelcovers! The top and lower [section] are finished in colonial White and middle in flame red.

The fifth model is a Fairlane 500 Tudor hardtop built from a second run 1966 “Trophy Series” AMT kit. It represents the growing trend at that time of more detail as it not only has an engine, but also working steering and opening doors! It sports a correctly detailed interior of black, white and yellow, replicated from a Ford brochure. The top and lower [section] are painted in Inca Gold (an authentic non-metallic mustard-like 1957 Ford color), and middle [section] in molded color of Colonial White. 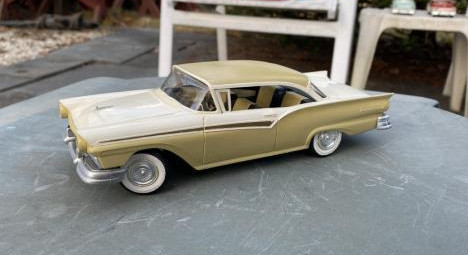 The sixth model is a Revell Country Squire Station Wagon issued in 1957. It is a built-up factory assembled model for hobby shops and toy stores, made as a promotional piece to help sell the unassembled kits! It originally came with a cardboard stand plus cowboy and young boy figures. I bought it from a small hobby shop/candy store when I lived in Ridgewood Queens in the 1960’s. Being very detailed, it has an engine, and fully finished interior in brown with beige seats. The body is cast in Ford Silver Mocha Metallic and oak and mahogany wood trim, painted on. Its fully detailed chassis was used on the Ranchero kit from 1975! As detailed as it was, neither this built-up nor the kit had clear windows! 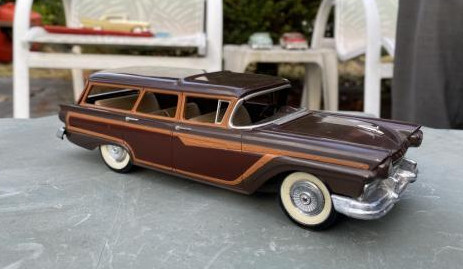 The seventh model is a Product Miniature, Country Sedan Station Wagon. Product Miniature was authorized by Ford to make station wagon models from 1955 to 1958, while AMT continued with the hardtops and convertibles into the 1970’s, especially with other Fords such as Thunderbirds and Mustangs. This 1957 Country Sedan was originally the friction toy store version with no windows, black wall tires, and cream colored wheel covers. I made it more realistic by adding a windshield from an AMT kit. Quarter window clear acetate, and also adding whitewalls and silver wheel covers. The body is cast in Ford Starmist Blue. 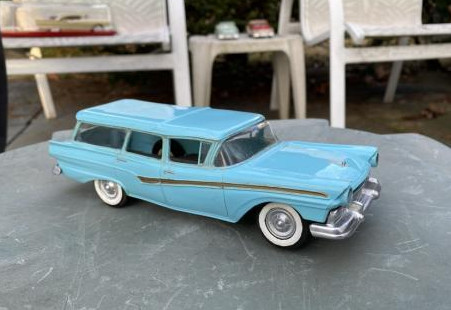 In conclusion. Product Miniature was especially known for producing increasingly detailed models for Chevrolet, also beginning in 1950 or 1951 thru 1956. As mentioned earlier, it was AMT that pioneered the use of cellulose acetate plastic for model cars, which allowed models to be cast in authentic car {color], as well as bright colors for toy store versions without painting, (except for 2 tone and 3 tone colors which were sprayed on.)

Beginning in the late 1940’s promotional models (and toy store scale models) were made of pot metal and fairly well detailed, but were solid & the windows painted a contrasting color. Their shortcoming however is that the bodies were not primed and the car colors soon flaked off. These metal models were cast by Banthrico National Products and Master Caster and some of the earlier ones in the late 1940’s were about 1/30th scale, especially Chrysler Corporation. The 1/25 scale plastic AMT’s and Product Miniature models were produced simultaneously with the metal ones, the last metal ones stopping about 1956.

Banthrico occasionally made retro models into the 1970’s, most notably a 1955 Corvette in rare Pennant Blue with tan interior! Going back to Product Miniature, they were at their best in 1953 and 1954, when they produced almost everybody style every series, including a [Chevrolet] 150 and 210 in all colors! Most of these were promotional banks and a few toy store versions, usually Bel Air sedans. The rarest were ;probably the wagons produced in larger 1/20 scale.

Beginning in 1957, SMP (Scale Model Products, a division of AMT) made the official promos and friction models. Product Miniature continued with cruder Chevys, especially toy versions of four door sedans not made by SMP, ending with the 1959 and 1960. More to come in a future article!