The Feature Car Of The GNYR Motor Parkway Memories Meet

Those people who name their cars, usually do so affectionately. My parents have always done so with their cars, from “Miss Annabelle Lee” to “Daisy” to “Little Lady”. Even my Dad’s Lincoln Town Car is named “Abe”. We even hear the insurance company spokesperson on TV talking about a car named “Brad” that got totaled in a wreck. But then there are some who would rather name their car after what it truly is… “The Black Beast”. 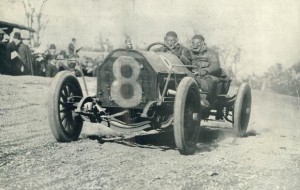 But what else do you call a black car with a 680+ cu. in. engine (Oh, and that’s only 6 cylinders mind you), and with no headlights, doors, top, or the usual automotive comforts is obviously cut out for only one activity, driving real fast?! Oh yeah, I forgot… it’s ridiculously loud as well!

When GNYR member Howard Kroplick pulls up in the ALCO, the car commands your full attention and won’t settle for less. This car is an event itself!

The Black Beast is quite an interesting vehicle in a number of different ways. Lets start with the basic. In the pre-WWI days, as someone once told me, if you could say a work, there was probably a car named after it. Seems that THE thing to get into manufacturing then was making automobiles, especially after Henry Ford made them affordable. So it was that even a huge manufacturer of steam railroad locomotives got into the act. ALCO after all stands for American Locomotive Company. ALCO was reasonably successful in building a Information for this article came from Howard Kroplick’s high quality automobile. One of the ways an automobile manufacturer can advertise their cars, is by racing them. Today’s NASCAR is a demonstration of that where each vehicle is built to look like an everyday automobile (not like the old days where they actually used modified everyday automobiles). In the days of the Vanderbilt Cup, your big car companies ran their best and most powerful machines on Long Island for the bragging rights of winning The Vanderbilt Cup! That would bring a large by Althea Travis amount of business to the respective car company. And so it was for ALCO, after entering their 1909 machine.

The “Beast” won both the 1909 and 1910 Vanderbilt Cup races under the command of Harry Fletcher Grant as driver, and Frank Lee as Mechanician, and also entered the Indianapolis 500, however catastrophic engine failure resulted in the vehicle not winning the race.

The car has all the goodies of the day. Dual Ignition, Newcomb carburetor and was modified from the original 60 hp to 100 hp.

Interesting to note that the American Locomotive Company, like Studebaker, was acquired by the Worthington Company in the 1960’s, so the company still exists to some degree today.

Come, see and certainly hear an amazing piece of automotive history at our Motor Parkway Memories Meet on April 24th at the Williston Park American Legion Hall, where Howard will be pleased to discuss the vehicle with you!

Information for this article came from Howard Kroplick’s website, www.vanderbiltcupraces.com, as well as www.wikipedia.org