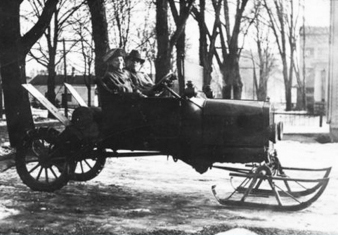 It seems in 1906 Virgil White – a Ford dealer in Ossipee, New Hampshire – began converting cars to snowmobiles, initially using a Buick Model G. Then, Ford’s Model T started to take off in popularity, so he began manufacturing the conversion kits for the Model T. He received a patent for his Snowmobile design in 1917. It seems he was the one who coined the term snowmobile and actually copyrighted it. He built his first Snowmobile attachment in 1913. He started to sell the conversion in 1922.

Also, there was a design by Charles H. Martin of Springfield Mass. His system was actually a test drive system for a light tank that proved not to be very suitable for civilian applications. This system relied on large military wheels and snow cables.

Only 70 units were sold by 1923 and in 1925 the rights to produce the attachments were sold to Farm Specialty Manufacturing Company of New Holstein, Wisconsin. They started to sell their version in 1926 as the “Mailman’s Special.”