You could not have written the script better. A gorgeous day, a gold coast mansion and grounds, well over 400 collector automobiles and all the great people to along with it. Normally, I would say, if it sounds too good to be true, it probably is. However, when you couple all these attributes, with one of the best car show crews around, wielding 49 years of experience on how to put on a car show, well, you get the 49th Annual GNYR Spring Meet at Old Westbury Gardens. With many special thanks to Violet Licari and Artie Finnegan for handling the registration and field layout, Mike Sussman and crew for judging, Paul Parnes and Genie Feminella for parking, general logistics and routing people where they need to go, all the wonderful people that manned th food area, the show went like clockwork and thousands of people had a great time. How do you top a meet like that? Bring in the Good Humor man in a classic Ford Good Humor Truck!! 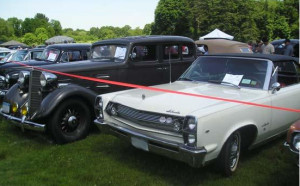 The spotlight car was AMC and Nash. When I heard several months ago that this was the spotlight car, I immediately called my Dad, whom most of you know is “Mr. Nash” after spending 40 plus years VERY seriously devoted to the brand, and told him I was willing to give up bringing the Studebaker to the meet, if he wanted to bring more than one of his Nash vehicles to represent the marque. 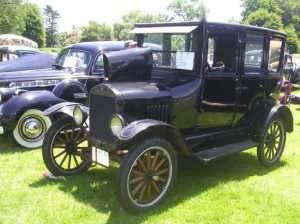 My brother Scott also gave up bringing his ’25 Model T. Dad agreed, as for the first time in a long time, he had three of his Nashes running at one time. Originally we were going to bring his ’19, ’34 and 67 Ambassador Convertible as a representation of the three important years for Nash and AMC. 1919 was the first model under the Nash name, 1934 was the year of the 1,000,000 Nash produced, and the Ambassador was of the second incarnation as AMC after the merger with Hudson in the ‘50’s. Unfortunately, after days of pushing to get the cars out, inspected, and repaired, Dad’s ’34 blew the generator cut-out a week before the meet. We had a new one found, and overnighted it in for the show. Dad spent the better part of a day wrestling to get the cutout mounted and generator back in the car (trust me, not an easy task at all). After that, he moved on to the ’19, and found that the usual problem we are all having with bad “gas” (said with quotation marks as I think we all agree this stuff they give us really can’t be gasoline at all), finally plagued the brass Marvel carburetor of this car, and we just couldn’t overcome it in time for the meet. The ’67 roared to life just as it always does, so Dad drove to the meet with his two best girls, my mom and the ’34 that he’s had since he was 18 years old. I took the helm of the ’67 along with my son Andrew, who discovered what it’s like to go “topless” with a convertible! Scott ended up bringing the ’25 Model T, that unfortunately on the way home broke something serious in the transmission.

At the end of the day, another feather was placed in the cap for our distinguished club! I cannot begin to believe that this meet has been around for almost 50 years. Then again, I can’t believe I’ve been around for more than 50 years, and most of them have been going to this meet, even back when it was at Eisenhower/Salisbury Park.