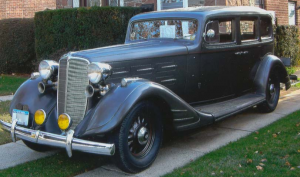 ‘Big Bertha” as we affectionately call her, is perhaps one of the truly fine classic Nashes to come off the assembly line in Kenosha, WI. The limited production Ambassador series of 1931-1934, represented Nash Motor Company’s try at breaking through the luxury automobile market of the depression years. Only a limited number of the big Ambassadors rolled off that assembly line, but nevertheless they compared favorably with the Stutz, Cadillac 8, Packard 8, and other luxury automobiles.

Charles W. Nash, Founder of the Nash Motor Car Company, made a statement to the public, that he would “never make a cheap automobile.” No doubt the public found that out in the dependability of the Nash automobile. The one-millionth Nash rolled off the Kenosha assembly line in 1934. 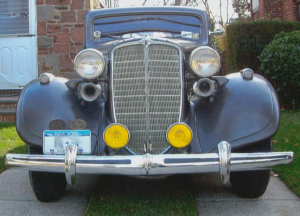 The 1934 Nash Ambassador from the front.

Paul discovered Big Bertha during the summer of 1954 in a local gas station (what is now “Jiffy Lube” at the base of Little Neck Parkway on Jericho Turnpike at Tulip Avenue, in Floral Park.) Under the dust of storage, one could see the fine solid condition that the car was in, and although the odometer read 62,258 miles, the upholstery was exceptional. The paint has turned to chalk from oxidation, and the bright work was painted with chrome paint because of excessive pitting and rust. It was learned that the garage owner, Me. George Smith, of Floral Park, NY was the original owner, and that his wife used the car almost exclusively. However, she was getting on in years and found the car difficult to park between the newly installed parking meters, and was difficult to handle because of the mechanical brakes and huge steering radius. The car was, and yet wasn’t for sale. Sentimental value weighed heavily with the owners, and they would only part with the car if they could be assured that it would be well taken care of. Paul explained to Mr. Smith that he would love to have the car, but really couldn’t afford it since he was leaving for college that fall. At college, he couldn’t help but daydream about owning Big Bertha. One evening in 1954, his Dad, Walter, called long distance to say Mr. Smith consented to sell Paul the car for a nominal sum of $75.00. Needless to say, Paul was thrilled at the offer, and that Christmas vacation, they took possession of the Ambassador.

In looking the car over, Paul noticed that the original headlamps were replaced with Guide sealed beam units. Yes, the originals went in the rubbish only two weeks before he decided to sell the car. When sealed beam lamps came out, he decided to update the car and “they were only gathering dust in the garage.” For years and years and stacks of correspondence, we have only located one original in Chicago. And still need another. To the best of my knowledge, there are only a couple of 1923 Ambassadors in existence today in various conditions.

In the 1980’s, the car was laid up, as a bad engine overhaul in the 1950’s led to poorly seated rings and a smoking condition that progressively got worse, and then family obligations that took priority. 3 years ago, through the encouragement of his sons, the car received a new set of rings and wrist-pins, as well as all of the fuel system gasketing and rubber updates to compete with today’s so-called “fuels”, and much needed work on the brakes and new tires. In December 2014, the car drove for the first time in thirty-plus years.

So, here is where I got my idea for an article. I’m following my Dad back home with the car, when I notice something dragging on the ground under the car. The tail pipe had fallen down.

The hanger was still there and it appeared that a weld that held the pipe to the hanger had given way. First thought was, “gee, all I need is a wire and we’re good to go”. Guess what I didn’t have in my tool box?? So a thorough search of the grassy area off to the right revealed an old but usable piece of wire. That as well as an old clamp, that was still hanging on to the pipe, was used, and the car drove problem free the rest of the way home. We hope to have the car out to a GNYR show in 2015!