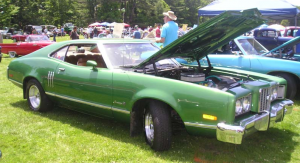 This month’s cover car belongs to 26 year GNYR member Jack Fisher, who with his wife, Marguerite live in Lynbrook “USA” NY. Jack is a retired auto shop teacher who taught at the Automotive High School in Brooklyn, and has 30 years teaching experience.

Jack received the Montego as a 60th birthday present from his brother Jonathan. Jack used to own a 1973 Mercury Montego that he bought new at Merrick Lincoln Mercury in Lawrence, NY. The original car, a metallic blue beauty was loaded with accessories, like power windows, air conditioning and had bucket seats. Jack points out that these cars are not seen too much anymore, and in fact when his brother went looking for a car, had to turn to the Internet and located the current car in Minnesota. The green paint you see now, replaced the original brown. Differences between Jack’s first Montego and this one is that this one, a GT model, has a 351 cu.in. Cleveland Modified high performance engine, bench seats, crank windows and no air conditioning. In addition, the 351 gets added assist from an Edel- brock 4 barrel carburetor, headers and a B & M “slap-stick” transmission The car is very rare, only being manufactured in 1972 and 1973, and only 2,000 cars made each of those years. 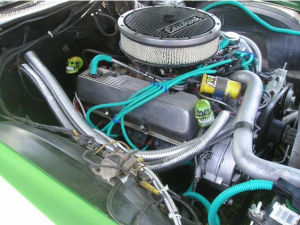 Jack has had the car for about 2 1⁄2 years, but the car was purchased about 3 years ago , as Jonathan had to hide the car for a couple of months in order to bestow the gift at the right time. Jack since added a can of “Mercury” on display in the back window of the car, simply because it’s green and says “Mercury”. It was found at a show and flea market in Hamburg, PA. Since then, Jack just loves to drive the car, not having much interest in trophies or “dust collectors”.

The biggest difference that Jack points out about this car to the one he had back in ’73, is that he hasn’t received any speeding tickets with this car!

Jack has already retired and along with driving his cars and ‘cycle, loves to go skeet shooting. As soon as Marguerite retires in a few months, they are moving to Berkeley Springs, West Virginia, where they have a house already. In the garage awaiting their new sibling is a 1959 Rambler and a 1947 Willys Jeep that unfortunately will need to be sold to make room for a pick up to replace the ’53 Dodge he had to sell. There will also be room for Jack’s 2012 Yamaha Twin Star 350 Motorcycle that he loves to ride on the West Virginia highways and byways!

The toughest thing Jack needs to do now is find transport for the Mercury, as that 351 Cleveland soaks up too much gas to drive down to West Virginia.