When a fellow teacher told me of an old car in a garage in Amityville, I jumped on my little Honda and went out to look at it. The guy told me it was a Buick, and as I lifted up the hood side curtain, I could see, cast in the engine block, “MARQUETTE”. Another fellow teacher told me it is a rare car, because Buick only made overhead engines, and this was a 6-cylinder flathead engine, and I should buy it. 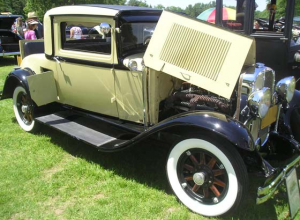 I started up the car with a battery, and hung a gallon gas can with a hose to the carburetor, and got it going. That was the start! With help, I took the body off the chassis, which was ready to fall off because the wood was all rotted. Measuring, I found that the car had been in an accident and the right side of the chassis was back one inch. In the school auto shop, we chained the chassis to a car lift and with a porta power, straightened it out. I brought the chassis home on the roof of my station wagon. Next was the wood. A friend gave me as many pallets as I wanted and they were all full dimensioned oak. I found a guy in Showheagan, Maine who had a Fisher Body repair manual for the Marquette. That was the beginning of all the wood work. That took almost 5-6 years to do. I made a sand blaster and did as many parts as I could. The automotive teacher who told me to buy the car came over and we worked on the engine. We did the main bearings, valves, and seats. He gave me the bushings for the starter and generator, rebuilt the oil pump and many other things, while still working on the wood. 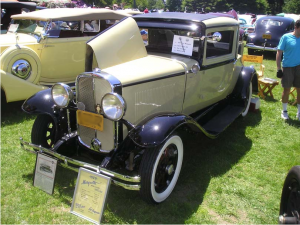 My sons bought me a compressor and I painted the car. When it was done, I borrowed a trailer for a case of beer and off we went to Hershey. I received second place for my class and I have been driving it for 21 years now.