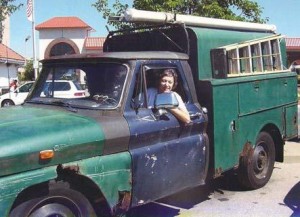 Then a Utility Body was put on because my first owner had a nursery and masonry business in Chicago. He used me until I retired in 1994.

Then an ad appeared in the Hemmings Motor News, and was seen by Paul and he bought me in 1997. I was driven on a long trip from Chicago to Queens. This was in mid-February and it was very cold. My first owner told Paul that I was in drivable condition and ready to work. Yeah right, I really wasn’t feeling very well because I was not in very good condition. Anyway Paul and his friend Junior talked it over. Paul put on my new license plate and off we went to New York. On the road I was spewing black smoke, my valve lifters were singing, tick, tick, tick and I leaked oil and drank gas as if it was free. My floorboard had holes as big as melons. I couldn’t get over 45 mph-but we made it.

When I arrived at my new home, he replaced my engine, exhaust system, radiator, plugs, wires, floorboards, etc. I didn’t look very pretty but I was raring to. With my new heart I was infused with new life.

For a while we worked on weekends. After two years he retired from his regular job and used me for his new business. For four years I woke up at six in the morning, cranked my engine anxiously to get to work. I was so happy to be useful again. 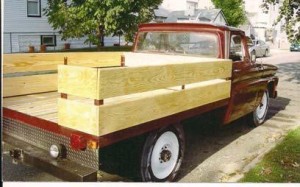 After those four years I was given a new facelift. My old Utility body was scrapped for an all new wood body. As you can now see in my picture. I got a nifty color change to maroon, and various cosmetics which are now complete. We joined a great club, the GNYR/AACA. I am looking forward to going to club shows and enjoy being with other members.

I am now garaged with Paul’s other trucks, the 1981 El Camino and 1928 Chevy Tow Truck and his newest acquisition, an open trailer, so I can bring the other vehicles to shows.