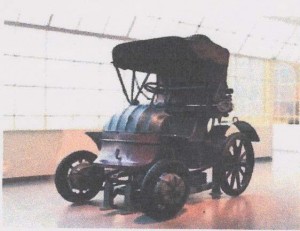 Far be it for me to crow about my illustrious ancestors. There’s enough to keep us amused for hours on those we know, without digging up (pardon the pun) those we may not be related to..But, when someone with the same last name has made a name for himself in the early automotive business, it’s worth mentioning.

In 1894, Louis Antoine Krieger of Paris, France began designing and building electric automobiles at age 26. By 1898 when electric powered vehicle interest increased in France, Krieger organized the Krieger Company of Electric Vehicles (Societe des Voitures Electriques Systeme Krieger). The Brougham, The Landaulet and the Electrolette were three of the models produced. In 1902 at least 65 were produced. Krieger produced or assisted in several racing including one called “Powerful” in 1900.

The Electrolette was a two person vehicle. Next to each front wheel was an electric motor of 3 horsepower. The pinion of the motor engages a large gear fixed in the wheel. The gear and pinion are enclosed in a tight case. Thus each wheel is turned independently by its own motor. The 800 pounds of Fulmen batteries are contained in a box which is fixed in the vehicle below the carriage body and is arranged so that it may be easily slid out from the rear. Kroeger claimed at least 65 miles on a single charge. Thus the well-to-do ladies of Paris could quietly hum over the boulevards of Paris to their various societal arrangements. The 1700 pound Electrolette on a level grade could do 21 miles an hour, or 12 to 15 over the average road.

In 1903, Krieger produced the first hybrid vehicle (HEV) which was also front wheel drive, had power steering and a gasoline engine that supplemented the battery pack. Krieger automobiles were the first to have regenerative electric brakes.

The Krieger Company manufactured electric vehicles until 1909 with some evidence that Louis Krieger continued to design and work with other models afterwards, including the Electrlette name.

One could conclude that Louis Krieger was 100 years ahead of his time, in that the hybrids of today are much the same as he built in 1903.