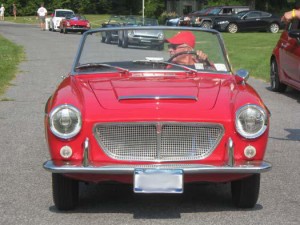 To my knowledge it has been more than 30 years since a marquee club held a national convention here on Long Island. In the early 1980s I attended a Triumph Owners Club National Convention with a TR7 owner. Only a year or two later that organization disappeared along with the presence of Triumph automobiles on the roads in the USA. Many performance marquis who might have wanted to have a national gathering here on Long Island needed access to a race track for competition events, but unfortunately the only one in the area, the Bridgehampton Race Circuit no longer exists and the former 512+ acre property now consists of very high priced homes, a country club and a golf course.

Earlier this year I was contacted by the local FIAT Owners Club Chapter and was invited to attend a meeting at the Hyatt Regency. I figured what did I have to lose? I made the trip with fellow Alfa Romeo/FIAT owner Vic Cerami to see what it was all about. We sat down with Sam Germana the local FIAT Owners Club “Head Honcho” and FIAT club members mostly from Long Island, and Westchester. We discussed what it would take to put together a national convention referred to as a “FIAT Freak Out” to be held only 6 months later. It didn’t sound difficult as long as we worked together, made individual contributions and worked as a team.

I’ve been around the automobile industry and the Italian car hobby since the 1970s… it was therefore easy for me to pull out names of contacts who might come in handy. When I heard sponsors were needed I immediately provided Sam with Laura Hingle’s phone number. Within a short time she and her employer Novak Motors signed on. As a local business just a few miles away from the Hyatt Regency they felt the connection with the FIAT Owners Club National Convention was worthwhile. When it was mentioned that a source was needed for the concours luncheon… no problem…..Tommy from Piccolo Ristorante was eager to work with the committee and put together what everybody thought was a spectacular luncheon.

The months seem to fly by and before I knew it I had registered and sent in my check to attend the concours, the concours luncheon and of course the Saturday evening gala dinner. As the date approached for the convention my biggest concern was the weather. It was the hottest weather we had seen here in over 10 years but at least it didn’t rain. Just two years ago we had a summer without any 90 degree days…..not the case this year. I would have liked to driven my 1963 Alfa Romeo Giulia Spider to the Hyatt Regency but due to the 95+ degree weather I elected to use my FIAT 500 Pop for the Hyatt Regency runs and my Alfa Romeo GTV-6 with a working AC unit to the concours.

I spent most of Thursday taking photos of arriving FIATs, photos of cars departing on the tour to Pindar Winery and working with the convention committee. I thought it was a wise move for Sam to move the concours to an earlier time, 9AM so the event could end a little earlier and let everybody get back to the hotel before any inclement weather arrived.

For me the trip from my home was less than half an hour. I guess a few heads did turn as I entered with my Alfa Romeo GTV-6…not the usual Alfa Romeo that people usually see. The grounds at Westbury Gardens are spectacular…. large enough for the Greater NY Region/AACA to hold a 580 car show there in June. It was great to see the folks from FIAT of Larchmont…..it’s a small world….it was at their Alfa Romeo dealership in December 1986 that I took delivery of the Alfa Romeo GTV-6 I own today 27 years later.

Working with such an expansive property made it easier for the concours committee to work with the incoming cars. There was plenty of room to move cars around, place them into their own area and of course take the panoramic photo of the entire field…I can’t wait to see that photo.

Lunch of course was spectacular…..Piccolo Ristorante is my favorite Italian restaurant. I was thrilled that everybody I spoke to, loved the food. As a matter of fact…later that afternoon back at the hotel when I called Tommy to thank him for the great luncheon…people were taking the phone out of my hand to personally thank him.

After the concours, I traveled on local roads to get home. I unpacked the Alfa Romeo, changed and drove my FIAT 500 back to the Hyatt Regency for dinner. I enjoyed sitting with FIAT owners plus fellow Alfist. It was unfortunate that I didn’t have the opportunity to speak to anybody from FIAT Corporate. I would have liked to talk to them their future plans for advertising FIATs plus Alfa Romeos in the USA…but that’s something to write about in a future article.