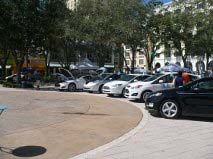 An all electric car show was held on Saturday morning, September 28th in West Palm Beach at Centennial Square, the site of many outdoor shows and concerts.

The show was hosted by Florida Power and Light and featured a number of electric vehicle manufacturers; seventeen were displayed. Visitors were permitted to sit in the vehicles while sales representatives explained the features of each.

Probably, the most appreciated feature of the was test driving various cars. Visitors, with a company representative, test drove cars through local streets. It seems that every driver returned with a big smile on his/her face.

The cars had stickers indicating the number of miles per gallon consumed equivalent to electric operation. On one car, the sticker indicated that using the traction motor in lieu of the gasoline engine, equivalent mileage was 95 MPG.

Electric vehicles, now under intense research and development, seem to be a strong contender for future automotive propulsion — time will tell. History seems to be repeating itself from the early days of vehicle propulsion when the battle was between steam engines, electric (traction) motors and gasoline engines.