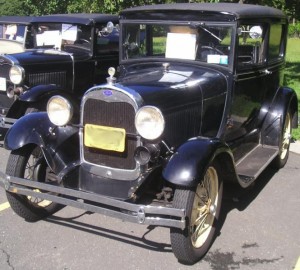 This month’s cover car belongs to Harry and Caroline Verity. Hailing from “Lynbrook U.S.A.”, Harry and Caroline have been members some 8-9 years now, and have been attending meets in their 1929 Model A for about 3 years or so. The car belonged to Harry’s father, who purchased the car about 18 years ago. Harry’s Mom found the car for sale in the local Pennysaver, and found out the car had been a local Lynbrook car for a while. The car was originally from Pennsylvania, but when the original owner couldn’t care for it any longer, a relative of the original owner brought it up to Lynbrook, and gave it some restoration help.

The car has been running very well, and has not given any problems. In fact, Harry just had the car at this year’s Easter Parade in Garden City. He has also shown the car at Old Westbury Gardens, Sagamore Hill, Lynbrook Atria and Greis Park “Expo” meets.

Some unusual points Harry told me about the car, are that the tail light is mounted to the body, rather than on the fender, which signifies that this is an early ’29 model. Also, Harry pointed out that on the engine block, where the engine number is, it says “Ford” next to it. Neither Harry, nor anyone else have seen anything like this before on a Model A. Another interesting thing happened when Harry and his Dad went to check the rear brakes and drums, and went through 3 wheel pullers trying to find the correct size for both wheels, as each wheel takes a different puller and has a different hub. Harry later met a guy in New Hyde Park who also had a ’29 Model A, and tried to help him with his rear wheels and found the same thing. Later, when the same guy bought another ’29 Model A, Harry brought all three pullers again for the same reason. They have not figured out why yet.

Since then, Harry has become quite adept at Model A Fords. He once noticed a crowd around a Model A at a meet. The owner could not get the car running right and all these guys were trying to figure it out. Harry noticed that the timing cover looked to be from a 1932 Model B, which is slightly different from the A and puts about 10 degrees more on the timing. The owner admitted he put this cover on because it was cleaner and nicer looking, and it looked to be the same thing as the Model A cover. Upon Harry’s insistence, the owner put the original cover back on and had no more trouble with the car, and thanked Harry at the next meet as Harry saved the man a lot of grief!