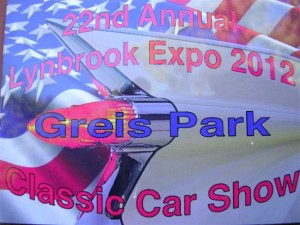 October is the wind-down month for car shows but it is also the wind up month for the amount of car events scheduled for that month. October 13 was no exception especially falling on the week the AACA Hershey show is scheduled. Still the Lynbrook Expo 2012 was a fabulous success as organized by GNYR member Harry Verity. A crisp cool atmosphere was provided by mother nature but a bonding of warm hospitality filled the air. This was the 22nd annual Expo at Greis Park.

A nice array of antique cars with a large assortment of Model A’s were present. Many clubs participated including the GNYR, among other notable clubs. A police helicopter hovered and landed in the park. Children were able to participate and have their picture taken while in the Firetruck’s cab. There was entertainment, crafts, military, fire and police exhibits, Civil War embankment, scouting and health/wellness displays, kids games and crafts, refreshments and more. I was particularly impressed by the Nassau Extraction team that literally used the Jaws of Life to take off the doors and hood of a smashed car.