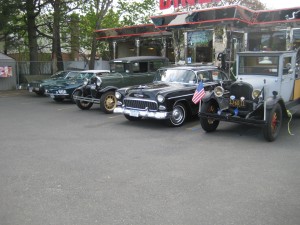 As this was the last Brunch for the season on April 18th at the Silver Moon Diner on Hillside Avenue, Queens Village, the owner, Chris, suggested that those of us who bring their vintage cars for display will get a 10% discount. So as the day dawned bright and clear, I cranked up the ’28 Chevy truck and with Genie Feminella in tow we headed for the diner.

We had a section roped off for all of us as Gene and Helen McCoy arrived followed by Anton and Charlotte Dietrich and Howie Attanasio. Gene and Berta Kennedy attended as did Joe DiSunno. Walter Weigand brought Catherine and his camera to record our gathering. Sebastian D’Agastino displayed his sporty Corvette and Tom and Ann Vitale sported their bright yellow Falcon.

Pete Pizza (ye that is his name) from the Chevy Club joined us. Pat and Milan Sharik came the farthest from Wantagh in their Model ‘A.’ Even two of Chris’s customers brought their classic cars to join us. Chris had group pictures of us  and our classic cars, that will be displayed in the diner.

Chris has asked us back for a repeat performance next April. The brunches will again resume in the Fall as now we must prepare for May 20th at the Rock Hall Museum, Old Westbury Gardens on June 3rd and all the other shows.

See ya on the road….Paul Parnes